My Cat is afraid of the TV 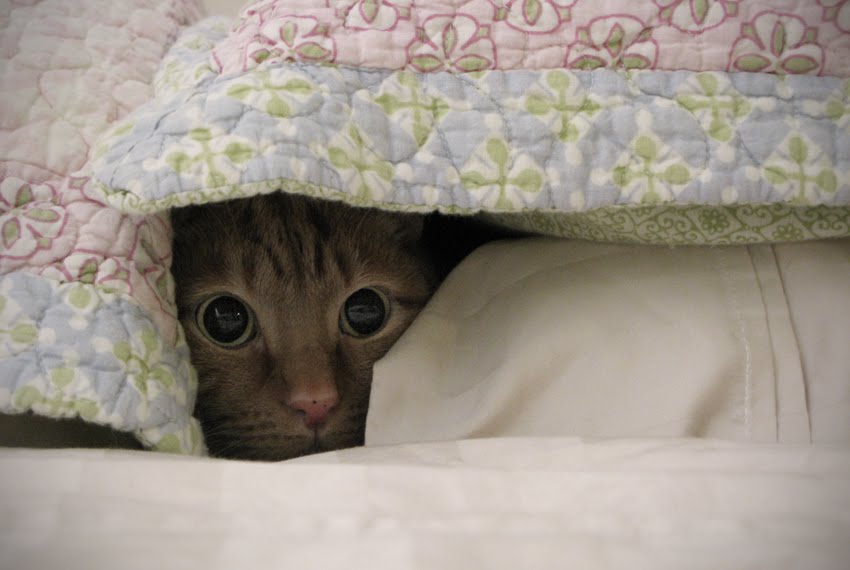 Dear Marie,
Hi. We read your articles in the Orange County Register, and we love them. We have a question for you.
We have a cat named Angel, and she hates the TV. Always has. If we bring her into the family room while we're watching TV, she will run out of the room, while keeping her eyes on the TV with the kind of look that could kill. If you ever saw it, you'd say the same thing: She hates the TV. Every once in a while she will come in while we're watching TV and sit with us for a minute or two. But she always ends up running out of
the room, glaring at the TV. It can't be the noise, because she doesn't mind the TV in the kitchen. She can't really see the TV in the kitchen, but she certainly can hear it, and it doesn't bother her. In the family room, we currently have a projector for a TV, and project the image on the wall. But even when we had a "regular" TV, she hated it.

We've had lots of other cats, and they would always spend time with us when we watch TV. We'd really like Angel to do this also, but it isn't happening. Any ideas on why she hates the TV, and what we can do about it? Thanks. Dan and Gina
Placentia

Dear Dan and Gina,
I love this question because to be perfectly honest – I’m somewhat baffled. My first reaction was that the noise was the culprit. But you stated she doesn't respond to the noise of the TV in the kitchen so that can’t be it. My second idea was that the projected shadows and movements on the wall were startling. But then you went on to say that even when you have a regular TV she was still bothered.

Now – if the kitchen TV is up high, and she cannot see it – then I do believe it is the moving lights, shadows and images on the TV screen, or projected on the wall in your family room that were/are the problem.
Most animals ignore TV images. Some are curious about them and some like to play with them. I used to have a cat who tried to swat at the moving pictures. She would never get tired of playing with her favorite TV characters! Over the years, some of my dogs would bark at the TV if there was a doorbell in the sound track, or a barking dog. But I’ve never heard of a pet who was afraid of television images. This is indeed quite odd.

Is your cat overly nervous in general? If that’s the case, that may explain her sensitivity to the moving pictures. But, we’ll probably never know for sure what is at the root of this behavior. So instead, let’s focus on what to do about it.

First, give her a little of her favorite canned cat food in the family room while the television set is turned on. Be sure to sit with her and pet her and talk to her in a soothing voice while she is enjoying her meal. If she likes little bite-sized cat treats, use those to entice her up on the couch with you while you watch a show.

If she likes to be brushed, follow up the special dinner with a relaxing grooming session. Again, keep talking to her and praise her. Tell her she’s a good kitty. If she likes to play, bring a toy into the family room – one that she can pounce on and chase. Give her the opportunity to feel like a successful predator, rather than prey – which is probably what’s going on in her head when she sees the scary movements coming from the TV screen.

Don’t expect instant success. Reward any small increment of improvement and repeat these activities each day. If she is social under other circumstances, she’ll eventually decide that she is safe and secure, even when the television set is turned on. It will just take a little time to get her past her anxiety.

Email ThisBlogThis!Share to TwitterShare to FacebookShare to Pinterest
Labels: Cat is afraid of TV