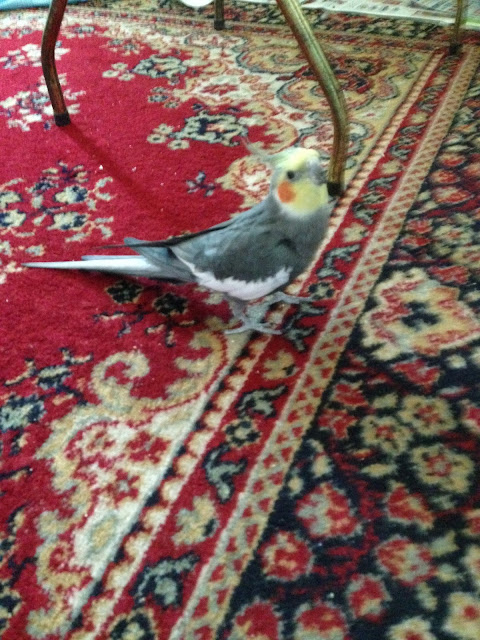 Dear Marie,
I adopted an adult cockatiel from the Irvine Animal Care Center in the summer of 2006.  I am a senior citizen (80 years old) and live alone, so he is my constant companion.  Recently, he started taking more naps than usual and I am concerned.  I cover him up with a sheet at night from the time I go to bed until I wake up in the morning, so I think he is getting plenty of rest. He has always been very energetic so his napping worries me.  How long do cockatiels live?  Is this a bad sign?  What should I do?
Claire

Dear Claire,
It sounds like you have a wonderful little friend and I can certainly understand your concern.  Cockatiels live anywhere from 15-25 years and you have had him for almost 8 years.  You’ll need to check your original adoption papers to see if the shelter knew his exact age when you adopted him, but don’t fret over any of these numbers.  I’m sure he still has a long life ahead to share with you.

Aside from the napping, is your cockatiel showing any other unusual behavior or symptoms?  For example, is he eating and drinking normally?  Are his feathers puffed out?  Has he stopped vocalizing? Is he cranky? If you see a combination of changes, then you should get your bird to an avian veterinarian as soon as possible.

Birds can mask poor health to such a degree, that most of their caregivers never know they are ill until it is too late.  If your little guy hasn’t been in to see the vet in over a year, you should take him in for a checkup.

I know that a trip to the veterinarian can be very expensive, and if you are on a fixed income, you may feel as though you can’t afford a veterinary bill.  But there are financial assistance programs available that can help you if needed.  For more information on this topic, please visit the following websites:

If napping is the only symptom your bird is exhibiting, then you probably have nothing to worry about.  As the days get longer, cockatiels tend to take afternoon naps.  Perhaps you just never noticed in the past or were out of the house more often.  Most people who live with cockatiels can attest to this seasonal behavior.

Birds need 10-12 hours of solid, uninterrupted sleep time which might be more than what he gets currently if you cover him up when you go to bed and wake him up when you get up.  He needs to be in the dark AND in a place where he feels safe and able to snooze.  If his cage is near a window, even if you cover it with a sheet, the headlights of passing cars will penetrate and wake him up.  The less he sleeps at night, the more he will nap in the day.  Try putting his cage in a corner of the room far from the window and use a denser, darker blanket to cover him.

Another point to consider is that during a molt (period of feather loss and growth), all birds get a little sleepy.  This is completely normal.  If you’ve noticed some feathers dropping in conjunction with napping, that may be the key to this mystery.  To ensure he has all the nutrients he needs during molting season, include plenty of healthy foods in his daily meals.  Fresh fruits and vegetables are essential, along with a high quality pellet mix designed for cockatiels.  Avoid giving him just “seeds” even if they are labeled “cockatiel diet.”  Seeds do not provide the vitamins and minerals that a diet of fresh fruits and vegetables do.  It’s OK to give him a few seeds, but think of them more as “junk food” rather than a true meal.

It’s good to pay attention to changes in a pet’s behavior.  Get that vet check, but try not to be too anxious about the napping.  I suspect everything is A-OK and your little friend will be around for many more years.

Posted by Dr. Marie Hulett at 3:55 PM No comments:

Follow-up to my last blog post on cat relinquishment at shelter... Dear Readers,In my last blogpost, I wrote about the plight of a ten-year-old kitty who was left at an animal shelter by its very apathetic owner and her friend who were more concerned about the latest shopping center fashions than the welfare of the terrified cat.  I received more letters about this story than I have for anything else I have ever written.   I would like to share some of these very intense sentiments sent in by readers.

“…my blood was boiling just reading about this...the only thing that I would do different is put both of those woman in a cold cage and let them do some thinking instead of shopping” – Sharon

“As a member of several rescue groups, I realize that as despicable and heartless as it is, leaving a pet at a shelter beats leaving the pet in an abandoned house or dropping it on the side of the freeway.  But I still fervently hope that one day, when this lady becomes old and dependent, her children, having learned from her example, decide to leave her behind because she has become an inconvenience.” – Marlin

“I volunteered for an animal care center (shelter). The most heartbreaking times were when people abandoned their pet companions and walked away.   My wish for all of these heartless people ... Your children drop you off at an old folks home and never come back to visit.” – Annelle

“I am frustrated and appalled at people's irresponsibility concerning their pets. Your story about the two well-heeled women sickened me. I'm lucky to be in a group of Bichon Pet owners, who would rather cut off their own arm, than be cruel to their pet.  If you have any ideas on what can be done to change people's attitudes, please let me know. I would like to see legislation requiring mandatory sterilization, among other things. I don't know what's happened to our society, but, I guess it's time to make owning a pet a privilege, not a right.” -  Sarah

“…Animals ask nothing of us but love, food and shelter.  When you come home from a long day and everything else has gone wrong, the one thing you can count on is coming home to a loving pet.  They greet you as if you are the best thing in the world.  No matter how bad my day has been…when I come home I know all will be forgotten because of the unconditional love. You can be upset and they will cheer you.  You can be mad and one touch of their paw and you are happy.  There is no emotion that a pet cannot make better. The idea of just tossing an animal away when you are through is so inconceivable to me that I cannot even comprehend doing something like that.  Someone that you have spent 10 years of your life with and when you are through just disposing of it and then laughing and spending the day shopping.” - Barbara

“I hope that your comments in the article about responsible treatment of pets will help with public awareness about the care of pets. I'm dismayed to see that some people seem to regard their pets as animate decor, to be given minimal food, water, and attention but not treated as fellow beings with personality and emotions. This is an attitude which needs to change, and perhaps your writing can help. But until people's perception of pets changes, I think some pets will be better off in shelters rather than suffering with their self-centered owners." – anonymous

I wish I had room for more comments and I thank all who have written for sharing their thoughts.  As a follow-up, the kitty who was the subject of my last post has not yet been adopted.  Sadly the stress of being in a shelter has caused her to begin pulling out her own fur and she is not doing well.  She needs to be placed in a home as quickly as possible, but finding a home for a 10-year-old cat is never easy.

It’s time to change how society views pets under the law.  Many of you have great ideas.  Share your thoughts with your elected officials and perhaps we can make a difference by working together.

Email ThisBlogThis!Share to TwitterShare to FacebookShare to Pinterest
Labels: cat dumped at shelter

Posted by Dr. Marie Hulett at 9:12 AM No comments: