Dear Marie,
My roommate of 4 years has a new boyfriend (2 months) who is a smoker.  Because she is such a good roommate and always has her half of the rent on time, I overlook small problems that come up every now and then.  But I think I made a mistake by saying it was OK if her boyfriend smoked inside our home, and now I’m regretting it in a big way because he is here all the time…smoking!  I have a parakeet, a cat, and a small dog and they all seem to be suffering.  It may just be my imagination or coincidence, but since he came into the picture, it seems like my pets are sneezy, have runny eyes, are lethargic, and even have episodes diarrhea.  I don’t want to seem like I’m complaining, but I don’t want anything to happen to my pets either.  We only have a two-bedroom apartment and sometimes it’s so smoky inside, I think I’m walking through London Fog!  What should I do?
Sheila

Dear Sheila,
I understand that good roommates are hard to find, but if she is as good as you say, she will understand if you tell her that you would like her boyfriend to only smoke outside.  If he is a decent guy, he’ll understand too.  If they give you a hard time about this, it may be time to find a new roommate.

The fact is secondhand smoke is a serious health hazard for your pets AND YOU!  There is no reason that you should live under this condition.

But let’s just examine this issue from the animal health perspective.  Here are the facts.  Cats who are exposed to cigarette smoke are three times more likely to develop lymphoma as cats who don’t live with smokers.  Because cats groom themselves with their tongues, they ingest all the chemicals from the smoke that has settled onto and into their fur.  Essentially, they are getting a double dose of poison: one from just trying to breathe, and the other from grooming.

Cats, like many humans, tend to be more likely to develop asthma if they are subjected to secondhand smoke.  And it is not uncommon to see chronic bronchitis in dogs that live with smokers.  Dogs who live in cigarette-smoke-filled homes also have a much higher risk of developing nasal tumors—especially dogs with long snouts—due to increased interior surface area on which carcinogens cling and wreak havoc.  Sadly, once diagnosed, dogs with nasal cancer usually don’t live beyond a year.

Of course, pets of all species are at risk of developing lung cancer, severe respiratory problems, cardiac abnormalities, eye irritation, diarrhea, vomiting, and other health maladies associated with the hundreds of chemicals and toxins that come from tobacco smoke.

If you have a pet that likes to eat nonfood items that he finds on the floor, you should know that cigarette filters and butts are extremely toxic.  A small or very young animal that eats as few as two cigarette butts can die within a very short amount of time from the point of ingestion of these hazardous discards.

For bird owners, secondhand smoke is particularly dangerous as birds are far more susceptible to airborne toxins and carcinogens than other animals.  They may rapidly develop life-threatening respiratory problems.  Some birds begin feather plucking after exposure to secondhand smoke, which if left unchecked, will damage feather follicles to the point where no new feathers will ever grow again.  Heart disease, eye problems, and lung cancer in birds are all very real consequences stemming from living with a smoker.

Even if your roommate’s boyfriend smokes outside, you should immediately invest in a high quality air purifier.  This will reduce some of the hazardous chemicals that are stuck in your walls, carpet, furniture, etc.  Also, ventilate your home as much as possible.

There has been some talk about “third-hand smoke” which amounts to the toxins that cling to a smoker’s hair, clothes, etc.  If your pets cuddle with your roommate’s boyfriend, they may be exposed to harmful contaminants.  Depending on how far you want to go with safety precautions, you may need to put your pets into your bedroom whenever the boyfriend comes over.  But, if he is over “all the time” as you mentioned, then it may just be time to move on and find a new place and/or a new roommate.  It may be hard to break the news, but honestly, it’s so much harder to see a beloved pet die from a preventable disease.
Posted by Dr. Marie Hulett at 7:36 PM 1 comment: 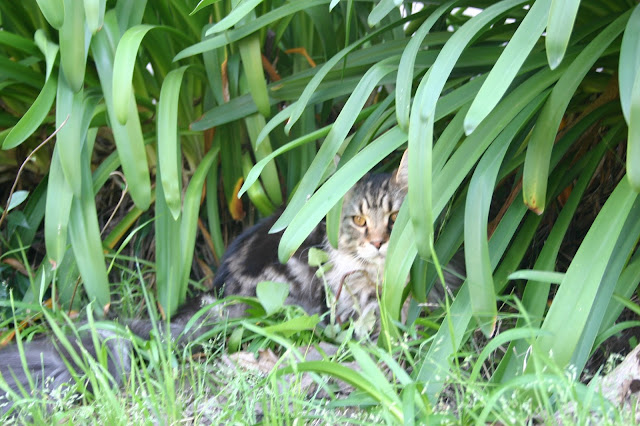 Dear Marie,
Our neighbor claims to “own” a cat that wanders throughout the neighborhood and frequently spends time at our house.  As far as I can tell, the cat is never allowed into the home of the “owner” and is outside during the coldest of nights.  We have been giving it food and water for at least three years and have taken it into the vet on numerous occasions when it has been injured in cat fights.  When it is particularly cold or rainy outside, we usually let him come in our garage and keep a box filled with blankets in there for him.  One of the reasons we did this was that we were never certain that the cat even had a home.  Last month, we took him to the vet to be neutered because he had fathered dozens of kittens in our neighborhood.  (There are a lot of stray cats here.)  His owner has never taken any kind of responsibility with him.  When she found out that we had had him neutered, she was furious.  She came over and threatened to call the police.  She told us not to bring him in our house anymore or give him food.  Yet she continues to leave him outdoors and I don’t even know if she feeds him.  I have never seen a food or water dish outside for him.  The cat keeps coming over to our front door and begging for food and he is getting skinnier and skinnier.  It is breaking my heart.  What can I do?
Marta,
Stanton

Dear Marta,
I am sad to report that many cat owners treat their pets exactly as your neighbor does hers.  In the minds of many, cats don’t need much care, and to a large extent, they are left to fend for themselves.  And yet when kind neighbors (such as yourself) attempt to provide a little love and compassion, their only reward is anger and threats on the part of the self-proclaimed cat owners.

There are a couple of things you can do in this situation.

First, you can talk to the owner and let her know that you weren’t sure if the cat indeed had a home and that is why you were providing various forms of care.  Let her know that you are very fond of the cat and would assist her in any way with care and feeding.  It may just be that she is financially unable to provide for her pet and is feeling embarrassed about the situation.  Often, embarrassment causes people to act out angrily in a situation like this.  Let her know that neighbors are supposed to help neighbors and that you’d like to wipe the slate clean and be friends.  If you are successful in this endeavor, you may be able to give her some tips on cat care and ultimately steer her down the path to becoming a responsible pet owner.

Chances are, this won’t work.  People tend to be too proud to work things out, as unfortunate as that seems to be.  So the next option I offer to you is the law.  An Orange County Codified Ordinance very specifically states that no pet may wander onto any private property without the expressed permission of the property owner.  Your neighbor’s cat is obviously still roaming the neighborhood, which is a violation of this law.  Therefore, you may legally trap the cat and take it over to the Animal Shelter.

I am assuming that you would be willing to adopt this animal and make him your own.  If this is the case, be sure to fill out a “hold form” to let the shelter’s staff know that you intend to adopt this kitty if its owners do not come to claim him.

Since your neighbor has provided the bare minimum of care for her cat – and even that is questionable, I doubt that she will redeem him.  Once the shelter has held the cat for the legally mandated number of days, you may officially adopt him and will be his rightful owner from that day forward.

I would strongly recommend keeping him indoors for the rest of his life – not only because this is the best way to care for a cat, but it will also keep him away from his previous owners who may still think that the cat is theirs.

If you do choose to turn the cat in and then adopt it, you may end up with a nasty neighborhood dispute, complete with the police knocking at your door.  Be sure and keep all of your adoption papers from the shelter, as they will prove that you are the legal owner.  Whatever you decide, I wish you – and the cat – all the best.
Posted by Dr. Marie Hulett at 9:35 AM No comments: