Can Cats and Dogs Get Along? 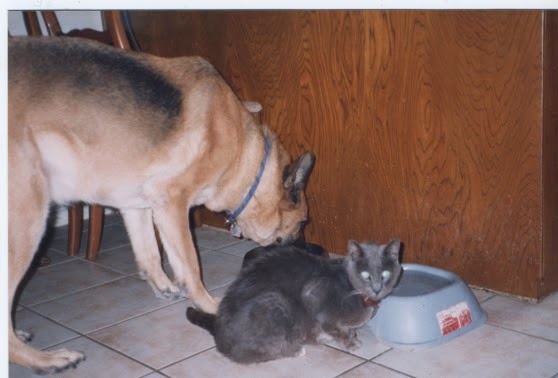 Dear Marie,
Can you train a cat to get along with a dog? About 2 months ago we adopted a 2-year-old Dalmatian/Whippet mix. We already had a neutered cat, male about 17 years old. The cat definitely does not want any part of the dog - he arches his back, hisses, and will extend his paw and claws in an attempt to strike at the dog when she approaches the cat. The dog (Dottie) is just curious and I think wants to befriend the cat but the cat is not willing.

We have tried to hold the cat, letting the two approach gently but without success. We let them look at one another behind glass doors (cat inside, dog outside) but even then, the cat does not seem at ease. So now we keep the two separated - allowing the cat his space in the downstairs room, forbidding the dog to enter that room. It would just be nice to see the two get along rather than worry about their paths crossing and the cat becoming agitated. Any suggestions would be grateful.
Birgit

Dear Birgit,
Dogs adjust to cats much more rapidly than vice versa. I expect that your dog is fairly playful and moves suddenly. Perhaps he even dances around the kitty. From your cat’s perspective, this is very terrifying. Nevertheless, it's important not to keep your dog outside or separated from the cat. Instead, bring Dottie in and put her into a cage-type kennel in the middle of the room that is your family’s main “hang-out”. Each time she is kenneled, make sure she has treats and toys and give her a lot of praise. As long as you are in the same room as the kennel, she won't object.

Let the cat come around at his own pace. He'll observe from a distance. You'll begin to notice that over time, he will get more comfortable. When he gets to the point that he can actually lie down and close his eyes in the same room, that's when you want to let your dog out. However, there is a trick to this...don't just open the door...she'll run right up to the cat and scare him and you'll lose all the progress you've made. Instead, prepare Dottie's food in another room...but within earshot.

Dottie will hear the food getting prepared and will know it is there. When she comes out of her kennel, she will go straight to the food. Of course, her abrupt movement will get your cat's attention, but he will see that Dottie has no interest in him. When Dottie is done eating, take her outside on a leash and go for a walk or play, then put her back into her kennel. Keep this going until the two animals ignore each other on a regular basis.

Sometimes it takes months - especially with older cats - but eventually, the two won't care about each other's presence any more. After that, it's anyone's guess if they will ever be buddies.

I had a German Shepherd (in the picture) from a rescue a number of years ago. He was six when he came to us and his general tendency was to attack small animals. This was worrisome since I had a 13-year-old cat. In the beginning, she was not at all happy about him moving in. But, we were able to get him to ignore her within a month of using this method. She, on the other hand, took a year to finally achieve a harmonious relationship with him.

At one point, our German Shepherd got seriously ill and almost died. He spent several days in the hospital, and then came home where I continued his treatment. He could not get out of his bed and we all thought he was going to die. Our little cat, who seemed like she never really cared about him, never left his side!

Somehow, he got better, and our kitty started showing affection for him from that point forward. They touched noses and she rubbed against him. It was very cute. I never thought I'd see the day that they would be buddies.

I can’t promise that your pets will show affection for each other like mine did, but they
will learn how to live peacefully. It just takes time.
Posted by Dr. Marie Hulett at 12:33 PM

Email ThisBlogThis!Share to TwitterShare to FacebookShare to Pinterest
Labels: dogs and cats get along