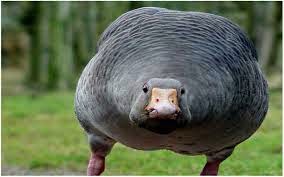 Dear Marie:
Recently, our grandchildren came to visit. We live adjacent to a park that has a pretty good-sized lake at the center. For as long as I have lived here, the lake has always attracted a sizable number of waterfowl,
including some very irritable geese. We usually ignore the geese when they start honking at us or walking in our direction. They used to be "all bluff." But this holiday weekend, two of the geese attacked my granddaughter as she was playing by the lake. She got a number of black and blue bruises from this
altercation. I think the geese have crossed the line on what acceptable behavior is. What can be done?
Betsy

Dear Betsy:
Believe it or not, I have received about a half dozen phone calls and letters this week about similar incidents. Geese generally have the reputation of being quite nasty. In fact, when I was a kid, I was attacked by a pair of geese myself. Some people I know have geese instead of dogs to watch over their property. As you and I both know, they are definitely ready, willing, and able to fill such a position.

Nevertheless, aggressive geese at a park present some serious problems. Some general safety precautions are in order. First and foremost...never feed the geese or the other water fowl. The constant feeding of these birds has created an environment where instinctual fear of humans is lost. Furthermore, the massive quantities of food thrown to the birds by park-goers causes unnatural population surges in an area that realistically cannot support so many animals. The combination of abnormally large water fowl numbers and the loss of fear of man lead to aggressive avian territorial behavior.

When geese interact with each other, they use a variety of postures and vocalizations to express their desires. According to veterinary experts specializing in avian wildlife, geese will extend their necks to indicate they are challenging another individual to a fight. When park-going children invariably reach out their arms to point, they appear (to a goose) very much like other geese taking an aggressive stance. The response from the nearby lake inhabitants, therefore, is usually to attack. Consequently, it is important that children, as well as adults, do not extend their arms towards any geese. Especially those that have already established themselves as belligerent birds.

One thing to realize is that most animals are, as you have noticed, all bluff. If you are confronted by geese that seem to be on the offensive, start running right towards them. Make a lot of noise and chase them back into the water. If your local trouble makers are met with this response on a daily basis, you can be sure they will be less likely to challenge human visitors in the future.

Never injure the animals; but re-introduce them to the fact that they are supposed to be afraid of you. They’ll get the message. Finally, you might check with the maintenance crew that serves this park to see if signs can be posted alerting visitors to the potential danger, as well as warning all not to feed the water fowl. Wild animals can take care of themselves. It is only when humans try and interfere that problems occur.
Posted by Dr. Marie Hulett at 3:16 PM